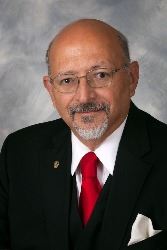 Edi E Birsan was elected to the City Council in November 2012 and re-elected in 2016. He served as Vice Mayor in 2017, and as Mayor in 2018. He is an active community leader and has served in many positions, from the Director of Community Services for Concord-Diablo Rotary to the President of the Friends of the Library, to volunteer for numerous non-profit organizations.

Birsan came to Concord in 1983 working for a global, inter-modal container leasing company. He started his own company in 1986, which currently focuses on certification/inspection and service in the inter-modal equipment field. He brings a history of running a small business as well as world-class experience in pioneering efforts at containerization of global trade.

Birsan was born and raised in New York City where he earned his Bachelor of Arts degree in dual majors of History and Political Science from City University (CCNY). He and his wife (they were high school sweethearts) have raised two generations in Concord and have lived in the same house since 1983 in the area off of Monument Boulevard.

State of the City