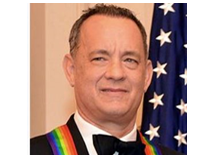 Academy Award-winning actor Tom Hanks was born on July 9, 1956 in Concord. He attended Chabot College in Hayward and California State University, Sacramento. He has won eight Golden Globe, SAG and Academy Awards for acting as well as seven Emmy Awards for producing. Hanks has appeared in many movies, the most memorable include:

Charley Koonz was born in Concord in 1987. He is a television and film actor known for playing FBI Agent Daniel Krumitz on CBS's "CSI: Cyber," starring Patricia Arquette and Fat Neil on NBC's "Community." After graduating from De La Salle High School in 2005, he attended Loyola Marymount University, where he graduated with a Bachelor's degree in theatre arts.

Legendary jazz pianist and composer Dave Brubeck was born December 6, 1920 in Concord and passed away December 5, 2012. The best known of the "cool jazz" musicians, he co-founded the Dave Brubeck Quartet in 1951. Some of his most popular compositions include "Blue Rondo a la Turk," "In Your Own Sweet Way" and "The Duke." The song "Take Five," composed by Brubeck's longtime partner, saxophonist Paul Desmond, was the first jazz instrumental to sell more than a million copies.

In the 1970s, he returned to his home town to play the Concord Jazz Festival at Concord Boulevard Neighborhood Park (now the Dave Brubeck Park), and later performed at the Concord Pavilion. 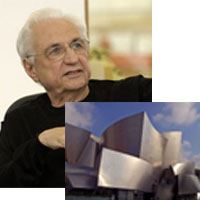 While not born in Concord, world famous architect Frank O. Gehry designed the Concord Pavilion in 1975 with landscape architect Peter Walker. In the mid-1990s, he returned to design the expansion of the facility. Gehry’s many world-renowned buildings include the:

He won the profession’s highest honor, the Pritzker Architecture Prize (called the "architecture’s Nobel"), in 1989. 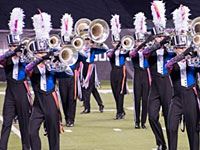 Concord is home to the 17-time World Champion Blue Devils Drum and Bugle Corps. Blue Devils Performing Arts offers young men and women between the ages of 8 and 21 quality educational and performance experiences in the areas of musical and dance performance. Over 450 young people participate in the program. The Concord Blue Devils are the most decorated drum and bugle corps in the history of Drum Corps International. 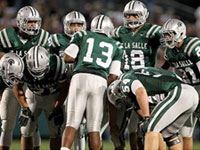 Concord De La Salle High School's football team holds the U.S. winning streak record of 151 games, set between 1992 and 2004. During that span, De La Salle won 12 California North Coast sectional championships and was named national champion five different times (once by ESPN, four times by USA Today). In August 2014, a Hollywood film titled When the Game Stands Tall was released with the plot line based on their 151-game winning streak.

Baseball great Tom Candiotti, born in 1957, is a graduate of Queen of All Saints Catholic School, Concord High School, and an alumnus of Saint Mary's College of California in Moraga. He is a former right-handed pitcher in Major League Baseball who was known for his knuckleball. He played for the:

At the time of his retirement, Candiotti ranked in the top 100 all-time in major-league history in starts and strikeouts. Candiotti is a television and radio analyst for the Arizona Diamondbacks.