The process of updating the plan included comprehensive outreach, public meetings and public hearings throughout the process. The Update found that the City has adequate sites to meet the City's Regional Housing Needs Allocation (RHNA), and updated existing programs and policies, providing new policies, as appropriate. On October 20, 2014, staff received a letter of compliance from the State Department of Housing and Community Development (HCD), indicating that the City's Housing Element Update met the statutory requirements of the State Housing Element law. As a result, the Housing Element Update was brought forward to the City's Planning Commission and City Council for review and adoption on November 19, 2014 and January 6, 2015, respectively and was adopted by the Council by a vote of 5-0.

In November 2013, the City's Community and Economic Development Department initiated preparation of an Update to the City's Housing Element for the 2014 to 2022 planning period, referred to as Cycle 5. The City's consultant, BAE Urban Economics, Inc, reviewed the previous Housing Element and revised the document to reflect current conditions, city policies, and methods to meet the housing requirements mandated by HCD. Emphasis was placed on developing a clear, concise, and legally defensible Housing Element that met the varied housing needs of the Community.

The City's primary objectives through this Update process included: 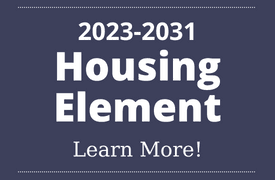